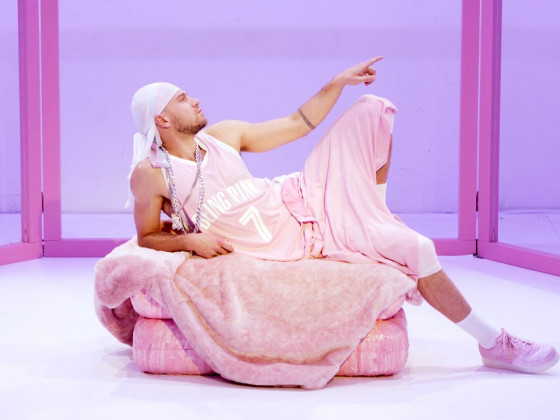 Pink people wanna know if other pink people like hip-hop
how can it still be hip-hop?
That’s like asking, if Black people like
Dirty Harry
is he still Clint Eastwood? (Greg Tate)

Gangstas, Pimps and Hoes: The US rap world is filled with hyper masculine images. When Black artists such as Cam‘ron and Kanye West launched a fashion trend of pink fur and velourin the early 2000s, they proved that even Barbie’s favorite color could not damage their image of heterosexual hypermasculinity. Joana Tischkau draws on these events to expose the fragility of social constructs such as race and gender: How are bodies of color used to consolidate the structural power of white Cis-men?

JOANA TISCHKAU dances. Her first dancing memory goes back to Kaoma’s 1989 Hit Lambada which she moved to at a children's birthday party. This experience led her to enroll at her neighborhood dance school for training in Jazzdance, Hip Hop and Videoclip Dancing. In 2010 she decided to make it official so she went on to study contemporary dance and theatre at Coventry University in the UK and choreography and performance at the Institute for Applied Theatre Studies in Giessen. Her artistic practice is a hybrid mash-up where the writings of bell hooks meet beatboxing, whiteness is turned into a work-out, youtube tutorials become here only source material and where Roberto Blanco is hailed as an afro-german hero, subversively distorting socio-cultural practices, codes and meanings inscribed onto bodies of color within the context of pop culture, western art and dance history. Joana works independently as a choreographer, dancer and community dance artist and in teaching. One of her recent productions, PLAYBLACK is a copy of the 1990 Kids Television program Mini Playback Show and was invited to the Tanzplattform Deutschland in 2020. PLAYBLACK formed the conceptual breeding ground for BEING PINK AIN'T EASY.

A production by Joana Tischkau in co-production with SOPHIENSÆLE, Münchner Kammerspiele and Künstlerhaus Mousonturm as part of the Tanzplattform Rhein-Main. The Tanzplattform Rhein-Main, a project of Künstlerhaus Mousonturm and the Hessisches Staatsballett is made possible by the Kulturfonds Frankfurt RheinMain and supported by the Kulturamt der Stadt Frankfurt am Main, the The Hessen State Ministry for Higher Education, Research and the Arts and the Stiftungsallianz [Aventis Foundation, BHF BANK Stiftung, Crespo Foundation, Dr. Marschner-Stiftung, Stiftung Polytechnische Gesellschaft Frankfurt am Main]. Supported by the Cultural Office of the City of Frankfurt. Supported by the NATIONALE PERFORMANCE NETZ Koproduktionsförderung Tanz, supported by the Federal Government Commissioner for Culture and the Media. Media partner: Siegessäule.