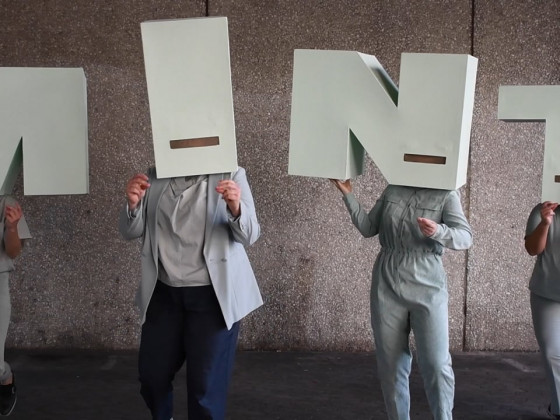 The show on november 30 will be filmed for documentation-, press- and marketing-related purposes.

In a performative laboratory that is simultaneously comedy, talk and game show, hannsjana confront the mechanisms of ostracisation within scientific disciplines. Why do comparably few women* study computer science? Which stereotypical and sexist views underlie the formulation ‘soft’ and ‘hard’ disciplines? In a scientific spectacle of empowerment and exchange, Die große M.I.N.T.-Show melts mounting fears and brings expert knowledge back down to earth.

Since 2011 Laura Besch, Alice Escher, Jule Gorke, Lotte Schüßler, Katharina Siemann and Marie Weich have been creating performances and audio walks as the artist collective HANNSJANA. In their artistic work, they challenge existing assumptions and engage with places and spaces in a humorous, poetic, musical and scientific way in order to make them experienceable and explainable to themselves and others. They have been shown at the Nationaltheater Mannheim, at the Kunstfest Weimar, at Theater Thikwa and at the Museum für Kommunikation Berlin. At the SOPHIENSÆLEN they most recently showed their audio walk Anstattführung.

A production by hannsjana, in co-production with Freischwimmen and SOPHIENSÆLE. Funded by the Capital City Culture Fund and the Senate Department for Culture and Europe. With the kind support of the Paul Scherrer Institute. The festival Freischwimmer*innen. The Future is F*e*m*a*l*e* is supported by the Senate Department for Culture and Europe and by the Capital Cultural Fund. Media partners: Ask Helmut, ExBerliner, Flux FM, Missy Magazine, taz. die tageszeitung, Zitty.