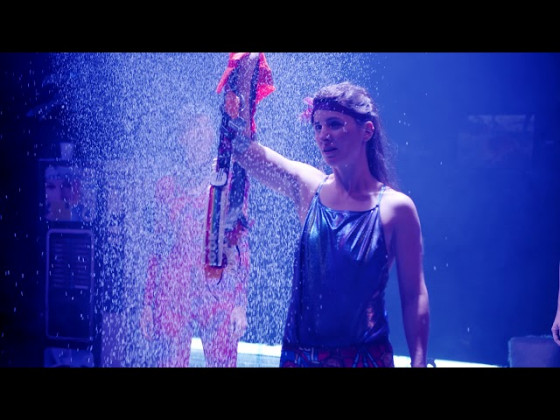 As a social panorama and set of values, Sunday ritual and socialactivity all in one, the German-speaking crime show Tatort brings people together while spanning generations and classes. As true fan-girls, the Rabtaldirndln present five female television commissionersfor the price of one male: because just like the performers,the Tatort commissioners face a world that is unjust, hard and difficult to understand. Between cardboard props and crosshairs, they develop their own plots and get intoxicated bythe idea of bringing law and order to the here and now! A colourful and crazy ride through the insides of Tatort as a cathartic exercise for a society in uncertainty.

CORA FROST is an actress, performer and director at Theater im Marstall (Munich), Maxim Gorki Theater and Radialsystem, among others. Since 2012 she has been showing works at Sophiensæle.

DIE RABTALDIRNDLN are a Styrian theatre collective that develops performances and theatre productions sind 2013. They are a permanent five-person cast and perform in the city, the province and abroad. The collective consists of Barbara Carli, Rosi Degen, Bea Dermond, Gudrun Maier and Gerda Saiko.

JULIA GRÄFNER is an actress and theatre-maker. Since 2015 she is a permanent member of the ensemble at the Schauspielhaus Graz. For her portrayal of Caliban in The Tempest by William Shakespeare, Gräfner was awarded the Nestroy Prize 2016 in the category "Best Female Newcomer".